He made scathing remarks about Rajamouli’s ‘Baahubali and also mentioned other films making allegations that the pan-Indian filmmaker had resorted to plagiarism and his work isn’t worth to be in any category for an award.

Not to forget, his debut movie ‘Mithai’ was a disaster and even his hero Rahul Ramakrishna disassociated himself from it even before the release. Targeting Rajamouli on a social media platform might be an easy thing.

However, one can’t make sure that helps in getting noticed just because one was targeting the acclaimed director who made the entire nation rally behind him with ‘Baahubali’. There is hardly any attention to Prashant Kumar’s remarks about Rajamouli.

As per the unconfirmed sources, Rajamouli reacted to his open letter saying that it was his opinion and also reminded him that there will be a lot of lobbying while choosing the winners for Oscars Awards.

Not only ‘Parasite’, but he also didn’t like several other award-winning movies, as well. Even their process of selection came under criticism several times.

To be frank, getting a foreign movie to be noticed by Oscard Awards committees is a strenuous and expensive process and there had been big debates on the selection process and the standards they had set.

It happened when the Indian movie ‘Lagaan’ entered the race for Academy Awards and how much Aamir Khan and his team endured during the selection process. However, Rajamouli’s response is from unconfirmed sources, folks! 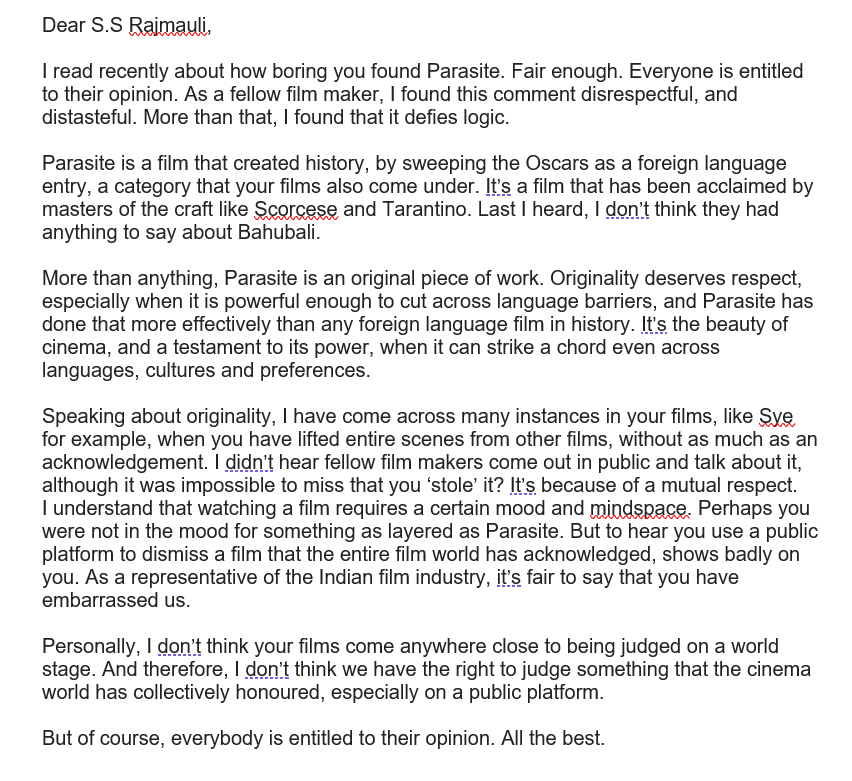